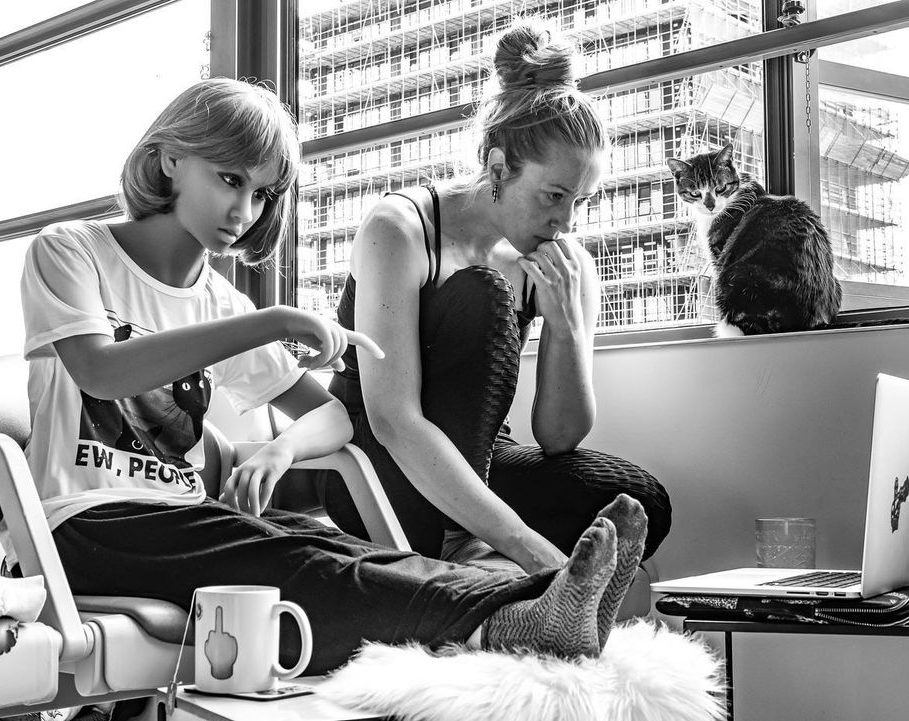 “I had to screw her head on myself”

Artist HANNEKE WETZER on living life in lockdown with a RealDoll and her two starlight stealing cats.

Words by Caspar Pisters, all pictures courtesy of Hanneke Wetzer

Trying on clothes, unboxing presents, flexing in yoga poses, chilling with a cuppa tea on a Sunday afternoon. At first glance the Instagram page of Eindhoven resident Hanneke Wetzer (41) and her roomie Nadiah looks like just another carefully curated influencer account, balancing out a fabulous lifestyle with that little hint of vain self criticism every once in a while (‘Who gained the most corona kilo’s?!’) to stay relatable to the less glamorous.

Until you realize that Nadiah’s expression is a bit… flat. In every picture. Nadiah arrived in a box and is made out of silicone entirely (great skin though!).

Someone asked me: did you check her holes? Man, no. I dressed her up”

She moved in with Hanneke and her glorious cats Maximonster and Blinki last year March, where she became part of Hanneke’s current photo project: Living Alone (Together).

We chat about it over Zoom, Nadiah sitting next to Hanneke dressed in a white shirt with deep cleavage and Hanneke doing most of the talking.

How did Nadiah come into your life?

“Early on during the first lockdown two friends of mine died, one shortly after another. I could not attend their funerals. I felt such a longing for closeness and hugs. It wasn’t possible and it made me feel so lonely. On top of that a lot of projects got cancelled or postponed. As an artist, I still wanted to create and it made sense to make the lockdown a theme. I had money saved up for a trip to Japan, which also got cancelled. I decided to spend it on a RealDoll, have her with me in lockdown as a model and roommate in one. From there on it kind of blew up.”

Is it very impolite to ask how much you paid for her?

“Nah, it’s the first question everybody asks. One thousand euros.”

That’s not as expensive as I expected.

“Well, keep in mind that you’re talking to an artist. But yes, there are versions that cost up to five or six thousand euros. It depends on the size you want, how big you want her breasts to be, stuff like that. If you want one that’s really life like, with actual human hair, you pay a lot more. You can also order versions that have a vagina that you can take out, which is practical for certain purposes.”

I started without the cats but they forced their way in”

I’ll not question you on Nadiah’s settings.

“Thanks. Actually the first thing I did after unwrapping her was put her some undies on. Someone once asked me: did you check her holes? Man, no. I dressed her up.”

How did she arrive?

“In a box, with her head detached but her body protected with a soft blanket. I had to screw the head on myself. I dragged the box to the elevator myself too, the mail man couldn’t do it because of corona regulations. She weighs forty kilos – it’s a lot of heavy lifting carrying her around. I remember that I hesitated a while before I opened the box, knowing that a real life looking body was inside. It was pretty weird, like a corpse in bubble wrap.”

Where does Nadiah come from?

“In my mind she’s from Russia. Her given name was Nadia, I added an h to it. I ordered her from a sex shop located in Lutjebroek – no joke. I figured that if she was going to be my roommate, I had to make her a bit more mine.”

Did you bond with her straight away, like kids do with their dolls?

“As a kid I preferred legos and technical stuff, so for me it was a new experience. But oddly, yes, she immediately developed into something beyond an object. I had a friend visit me once. She walked straight up to her and put her fingers in Nadiah’s mouth. Freaky! How can someone do that? Haha, it felt very off. I have built a weird emotional connection with her.”

Nowadays when people greet me they ask how Nadiah is doing, not how I am feeling”

Both Nadiah and yourself are lovely but let’s admit: the real stars of your pictures are…

“The cats, yes, incredible! Maximonster in particular, Blinki is a bit more reserved. I started out without them but they forced their way in.”

Their contribution is stunning. At some point I suspected you of photoshopping them in.

“No, it’s all real. I do take plenty of time for every photo though. I figure out the setting, I put the self timer at ten seconds, I take position and I check how it came out. The cats go nuts for the flickering little red light from the self timer, it’s what drags them into the scene. I started to anticipate on it, trying to figure out how I can seduce them to get certain responses out of them. Of course, cats being cats, they will usually not do what you want them to, and then brilliantly photobomb a scene the next moment. But a lot of pictures exist only in my mind because I couldn’t make them happen.”

Is photography your main thing?

“I have many main things. I’m fascinated by the body, I started out studying health science. Later I did art school in Utrecht. For one project I drew bodies – ‘beings’ – every day for three full years – I actually miss doing that. In photography I’m self taught but at this stage it is how I provide an income.”

Nadiah was your lockdown project. What will happen now that the Netherlands is opening up again?

“I suppose I’ll continue. People seem to really enjoy it, there’s a bunch of fans that are so swift to react whenever I put a new photo online. And I really enjoy it, too. Not once did I have to force myself to create a new photo. On the contrary even, more often I have to slow myself down. I’m just really into it. Besides, last year in this month we thought it was all going to be over and a couple months later we were back in lockdown. Do you think it will be different this time around?”

I do, I think the vaccines will make all the difference. Has Nadiah had her vaccinations yet?

“I’ve had my first shot. Nadiah thinks it’s not really necessary after all, even though a few months back she insisted on getting vaccinated.”

Did the project indeed help combat your loneliness?

“It really did. Figuring out the concept, staging scenes, interacting with my cats, and later having so many people responding to the pictures. It has been lovely and meditative. I could really relax and lose myself in it on days when I felt bad. But on the street, nowadays when people greet me they ask how Nadiah is doing, not how I am feeling. I’ve read up quite a bit about men who have a RealDoll to cope with their loneliness. They hug them and talk to them. I don’t do that, not outside of the photos. Nadiah feels a bit cold when you touch her. I should probably admit that I do talk to my plants though.”

If at some point you will quit the project, what will happen to Nadiah?

“That’s a question that I have on my mind. I don’t know yet. She’s already wearing down a bit, little cracks start showing between her fingers. She’s too big to keep around, but I don’t see myself throwing her in a dumpster, or selling her online. That would be harsh, wouldn’t it? I suppose we’re together now, it’s fine the way it is.”

Hanneke and Nadiah have a gig at Fotofestival Naarden, July 3 – August 29, go check them out in blow up size!

When KHOA LAM climbs up there in those silks, anything can happen

Vulnerable no more: how being open about HIV made FARDAD DADVAND a stronger person

Go to Appearance > Customize > Subscribe Pop-up to set this up.